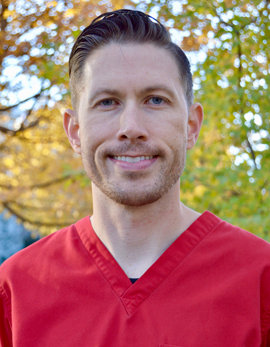 Dr. Sullivan grew up in Laramie, WY and earned a Bachelor of Science degree in Health Sciences and Pre-Medicine with Honors from The University of Wyoming in 2000.  He was simultaneously commissioned as a 2nd Lieutenant in the United States Army.

Dr. Sullivan then spent seven years on active duty as an Army Intelligence officer and paratrooper with the 82nd Airborne Division (Fort Bragg, North Carolina) and 4th Infantry Division (Fort Hood, Texas).  During that time he deployed for four separate combat tours of duty in support of Operation Iraqi Freedom.  Among other military honors, Dr. Sullivan is the recipient of The Bronze Star Medal, The Meritorious Service Medal and The Presidential Unit Citation.  He still serves as a Lieutenant Colonel in the Nebraska Army National Guard, and provides dental services for Nebraska Guard Soldiers every month in Lincoln.

Upon leaving active duty in 2007, Dr. Sullivan attended The University of Nebraska Medical Center College of Dentistry in Lincoln, NE to attain his DDS degree.  He graduated from dental school with Academic Distinction, while also being awarded top honors for his research work and patient care skills.

Dr. Sullivan enjoys staying fit and spending time out in nature with his wife Mandy and his two children, Aidan and Agatha.  He is an avid bicycle rider, and he is a classically trained tenor who always likes singing in music groups or anywhere else!  Dr. Sullivan loves the Lincoln and York communities, and is ecstatic to be practicing dentistry here.

Dr. Carlow was raised on a farm near Bloomfield, NE.  He graduated valedictorian of his class at Bloomfield High School in 2002.  He was awarded the RHOP (Rural Health Opportunities Program) scholarship and attended Wayne State College from 2002-2005.  He received his Bachoelor of Science degree in biology in 2006.  He attended the University of Nebraska Medical Center College of Dentistry from 2005-2009 and earned his Doctor of Dental Surgery degree in 2009.

Dr. Carlow enjoys spending time with family and friends.  His hobbies include lawn care and landscaping.  He is happy to have had the opportunity to practice dentistry in the strong rural community of York since 2009.